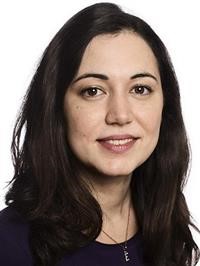 Elisa studied physics in Italy. During her master she moved to Denmark to do an Erasmus programme at the Technical University of Denmark (DTU) for one year. Elisa joined Martin M. Nielsen’s group at the Department of Physics. She really liked to work in this group and she decided to apply for a PhD-position at DTU, which she got. After her PhD defence she stayed 6 months at DTU for a postdoc-position to work at her MAX4ESSFUN project. After ending her MAX4ESSFUN project she moved to California, where she is currently working as a postdoc at Stanford University.

Elisa explains that it was very easy for her to collaborate with Kristoffer, because they knew one another well from her PhD. Since Elisa had already worked together with the researchers from Gothenburg University, Elisa became the link between Kristoffer Haldrup’s and Sebastian Westenhoff’s groups. Elisa describes the collaboration as very fruitful as each team brought in different expertise knowledge: “It was a very good exchange of information, skills and expertise. The scientists in Sebastian Westenhoff’s group from Gothenburg University are experts in biological samples, such as proteins, and for them it was new to do scattering on small inorganic molecules. In order to realize the experiment, they had in mind, the scientist group from Gothenburg needed assistance to perform scattering, and they contacted my previous group at DTU which is specialized in the technique ‘time-resolved X-ray diffuse scattering”

How the dynamic of molecules can be controlled
During her PhD and her postdoc, Elisa has used x-ray techniques, and in particular X-ray scattering, to study the dynamics of molecules in solution after they absorb light.  Elisa hopes that these studies will help to understand and ultimately to control molecular chemical reactions in solution. Elisa is studying molecules that contain ‘cheap metals’, such as cobalt, copper, and iron which are not as efficient to store energy as e.g. molecules containing platinum or ruthenium: “The molecules containing expensive metals are better at capturing and storing energy from e.g. sunlight which later can be transformed into electricity or used to catalyse chemical reactions of interest”. Since  platinum and ruthenium  are too expensive to be used for large scale applications, the goal of Elisa’s experiments is, first of all, to understand the photoinduced (i.e. induced-by-light) dynamics  of the cheap metals complexes and secondly – though this new knowledge – to modify these complexes (for instance by changing their structure or the solvent environment) in order to make them as efficient as the expensive one  – or even more.

The MAX4ESSFUN project; to document how the structure of molecule change over time
In the MAX4ESSFUN project Elisa studies the photodissociation of diiodomethane (CH2I2) in solution: the molecule is exposed to laser light and the induced chemical reaction is observed while it is happening using ultrashort pulses of x-rays.

Elisa explains that: “when you shoot laser light on the diiodomethane molecule, the molecules absorb the light and goes into an excited state. In this state, the bond between the two iodine atoms breaks and the diiodomethane molecule splits in two fragments. After some time, the bond is formed again, and the molecule can recombine. Because of very small length- and time- scale, this reaction is invisible to human eyes. The x-ray makes it possible to study this invisible molecular reaction as it is happening in real time”.

Elisa tells that only 10 years ago, it was not possible to follow the atomic motions during chemical reactions with x-rays as these motions take much less than a second. Novel x-ray facilities has made it possible to produce very short x-ray pulses that can be used to take snapshots of the evolving molecular structure and thus to make molecular movies. Due to the x-ray scattering technique at these facilities it was possible for Elisa to monitor the bond scission and the bond formation in diiodomethane in real time.

The same molecules, as Elisa is studying, have earlier been examined with another technique called ‘optical spectroscopy’. This technique has the limitation that it cannot directly monitor the atoms position, which is possible with x-ray scattering. Not surprisingly Elisa discovered something new about the molecules in her research by using x-ray scattering: “In the experiment we could see that, after bond scission, the two molecular fragments remain in the same solvent pocket. This is contrary to previous interpretations accordingly to which the two fragments would diffuse away from each other.”
Being able to monitor structural dynamics is very important insight, as the function of a molecule is often determined by its structure. To be able to control what the molecule is doing – so the molecule can serve a specific purpose – it is first necessary to understand how the molecular structure changes through all the steps in a chemical reaction: “From these experiments I get information about the dynamics that the molecules undergoes after absorbing light – and when we understand this we can ultimately try to control it”, Elisa explains. The long-term goal of Elisa’s scientific work is to fully understand and control the reaction pathways of light-absorbing molecules in order to efficiently utilize solar energy.

MAX IV is another good argument for moving back to Europe
Elisa has performed her experiments at x-ray facilities in California and Japan, where she used ‘x-ray free electron lasers (XFELs)’. In these facilities electrons are accelerated in a linear tunnel to produce very short and very intense x-ray pulses; while at MAX IV electrons are accelerated in a circular ring (synchrotron). Elisa explains that the brilliance (that measures the quality of the produced x-rays) at the three facilities is almost the same. Therefore, she thinks that MAX IV will be very useful for her in the future when investigating the properties and the excited state dynamics of different materials. Furthermore, Elisa pinpoints that MAX IV is a good argument for moving back to Europe and settling down in either Scandinavia or Germany, because these places have x-ray facilities (the European XFEL or MAX IV). According to Elisa it is good to have a facility like the MAX IV in Scandinavia because it attracts young talented scientists working with x-ray techniques.

Elisa explains that she spent a lot of intensive time together with the scientist from the Gothenburg group at the x-ray facilities during their experiments (beamtimes) and analysing the data afterwards. Elisa and the team had five days of 24-hours experiments which was very demanding physically and mentally but at the same time gave a lot of social energy: “A beamtime is a team effort, so it is also a lot of fun – it is a kind of a teambuilding event as well. You work intensively as a team to achieve your goal, and then you come home with a lot data which keeps you busy for months to analyse it.”

The whole project –from the sample preparation, through the experiments and the data analysis, to the final interpretation – requires a lot of different expertise and it is made possible through big scientific collaborations: “I really enjoy to get to work with people who are experts in different fields and techniques”, Elisa concludes.