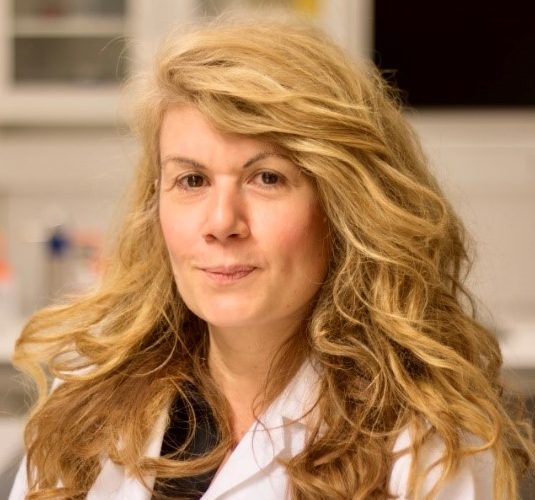 Selma is from Stockholm and holds a master’s degree in chemical engineering. Selma did her master thesis project in Australia where she studied two malarial enzymes. After her master Selma was recruited to a company in Stockholm where she worked as technical manager for the North and in this position, she did not do any research. During the time in the company she thought more and more about research and that she wanted to do structural studies of membrane proteins to help cure disease: “My goal in life has been to cure disease”, Selma explains.

As she saw an advertisement for a PhD in Copenhagen in development of new methods for structural studies on membrane proteins using neutrons and x-rays, Selma applied and got the position and started her PhD in 2011, which was funded by ESS. Selma tells, that she at that point did not know anything about neutrons and only a little bit about x-rays, and luckily, she did not see that as a major obstacle. During the PhD Selma developed a new method to deuterium-label human lipids which made it possible to study membrane proteins under close to native conditions using neutron scattering techniques.

After her PhD Selma went to the Karolinska Institute in Stockholm for a postdoc position but after a year of working in drug design through x-ray crystallography she moved to Malmö for a postdoc position in neutron and x-ray scattering studies of cholesterol particles and their interactions with the blood vessel wall. It was during this period that Selma did her MAX4ESSFUN project. In May 2018 Selma began working at MAX IV, where she will function as a link between industry and academia. Through this position Selma’s goal is to show the Nordic industry what they can achieve using the facilities in collaboration with academia and hopefully drive the creation of new materials: “I want to put people together who would otherwise not have collaborated, e.g. IKEA and perhaps scientist who make materials from bacteria”, Selma explains.

A model for analysing small-angle x-ray scattering data from particles in solution
Selma heard about the MAX4ESSFUN programme and the possibility of funding through her supervisor, Marité Cardenas. Marité saw MAX4ESSFUN as the perfect opportunity for Selma to study the structure of lipoproteins in solution, which was important to correlate with the lipid exchange events. With Marité as supervisor, Selma just needed to find a co-supervisor who she could collaborate with in the project: “When I heard about the MAX4ESSFUN project, I called a professor I had previously meet but never worked together with: Jan Skov Pedersen from Arhus University. I contacted him because I knew he had a small angle scattering instrument, which we needed to perform the test experiments, and because he is the leading scientist in the world when it comes to modelling complex small-angle scattering data.”

The project caught Jan Skov Petersen interest immediately, as Jan Skov Petersen did not have access to such complex samples, which Selma purified from blood from healthy volunteers. Jan agreed on the collaboration and together Jan and Selma applied for funding through MAX4ESSFUN. In the MAX4ESSFUN project they developed a new mathematical model for studying the structure of lipoproteins commonly known as the bad cholesterol. This model allows in situ studies of lipoprotein structure in solution and provides a way to monitor the structural changes induced by e.g. external factors that could have an effect in the development of atherosclerosis. The collaboration was very fruitful, Selma tells: “We both got a lot out of the collaboration and we showed that the scientific models which had been proposed for over 40 years were not correct. And I was able to use the model to analyse the structure of lipoproteins after they exchanged lipids with model cells.”

Selma and Jan’s model showed that the particles/lipoproteins have a layered type of structure and that the particles undergo large structural changes at different temperatures. Below body temperature (~36-37°C) the particles have a super-ellipsoidal shape (like a kinder egg) with distinct semi-crystalline layers of cholesterol esters inside the particle core. Above body temperature however, the particles are circular with the fatty core in a disordered state. This specific fat packing is dependent on the amount of triglyceride and seems to be a way to protect the lipids from oxidizing and ultimately from atherosclerosis (as oxidized LDL are more atherogenic). The way the lipids are packed is of vital importance of how prone the particles are to oxidize as it seems that the oxidized LDL particles (LDL – low density of lipoprotein) are more prone to accumulate at the artery and lead to the build-up of atherosclerotic plaque.
Selma’s dream goal is that her science can help the development of new medicine which can aid in or even prevent atherosclerosis and related diseases.

The model that Selma and Jan developed resulted in the first scientific article coming from MAX4ESSFUN. The model can also be applied in the study of other particles.
The experiment – where Selma and Jan Skov Petersen documented the shape of the particles/lipoproteins – they performed at Jan’s home lab in Aarhus since MAX IV does not yet have a small angle scattering beamline. Other experiments Selma performed at the European synchrotron (ERSF) in Grenoble, while the neutron scattering experiments Selma performed at the ILL in Grenoble, at FRMII in Munich and ISIS in UK.

The MAX4ESSFUN events help establishing new collaboration
Selma has participated at several MAX4ESSFUN meetings and events in Oslo and in Copenhagen. For Selma the events and meeting are important as they are a way to drive scientific collaboration further: “These meetings are always good, because they are a way to meet and talk and to hear about other people’s research, you get inspired, get new ideas and create new projects and new collaborations at these meetings. I don’t think I have ever left a meeting without starting a new collaboration”.
Selma explains that after one of these meeting she got in contact with Reidar Lund from Oslo university who she after the meeting started a collaboration with, and right now, they are writing a scientific paper together.

Selma tells that many young scientists are afraid of presenting their research projects at events and meetings because it is scary to talk in front of experts within the field. Despite this, Selma points at that it is very important to practice and share information to push the science forward. Selma explains that the neutron field within life science and biology is not as advanced as in e.g physical and colloidal chemistry, and that often no one has used the method, the technique or studied the object in that certain way before and therefore it is extra important to collaborate and get input from other scientists: “One person cannot be an expert in all fields, and therefore, it is so important to collaborate. What Jan Skov Petersen and I did in weeks would have taken other people five years to learn, because of the collaboration where we both came with unique and complimentary expertise from different fields”, Selma elaborates.